Chris Hadfield Explains Devoting Yourself to a Successful Life

Commander Hadfield expresses the lessons he has learned from floating around our little blue dot that we call home.  Greg is struck by the idea that the higher you get into space the more you can understand humanity.  Dave notes that in the commander’s case the message and messenger are totally aligned. Dave is also impressed with Chris Hadfield’s comfort in expressing the lessons from his success.  Greg recalls a moment he felt connected to how astronauts feel looking down on humanity. 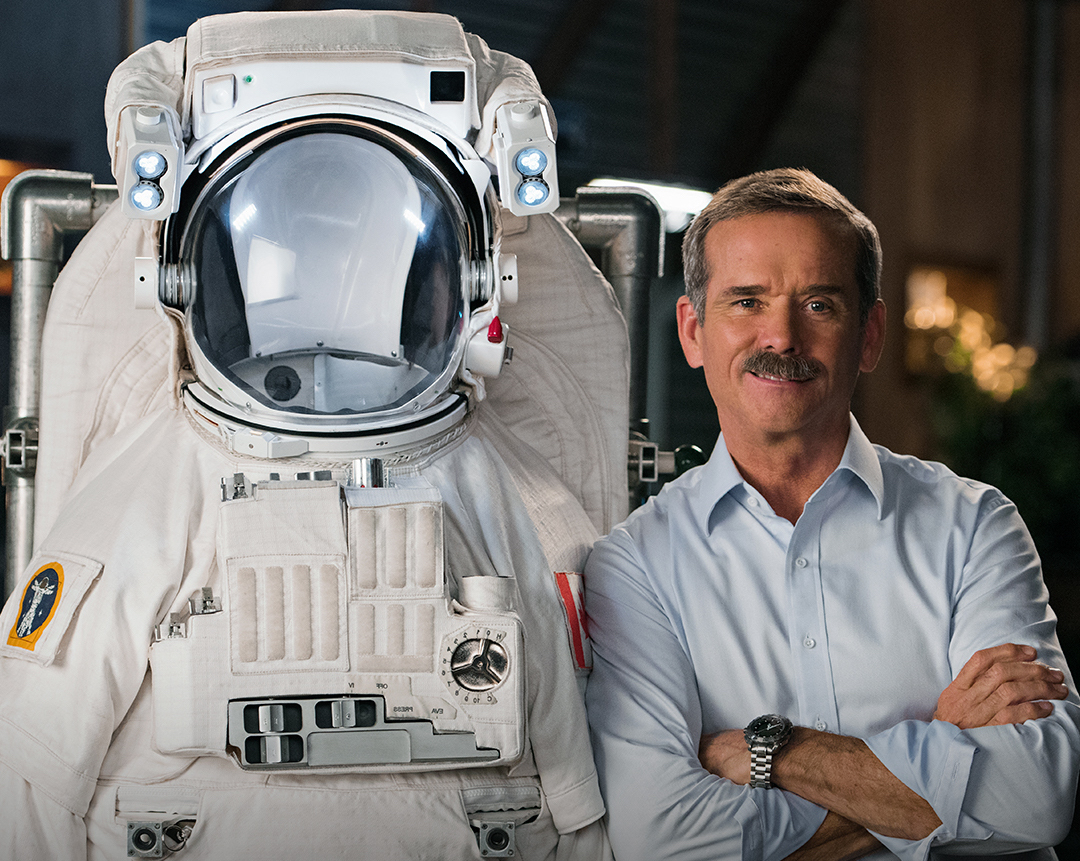 Perhaps no introduction is necessary.  Commander Chris Hadfield is perhaps the most well-known astronaut of the 21st century.  His exploits in space, and his willingness to share his experiences have inspired a brand new generation to consider a life in space exploration.  Hadfield has been to space three times in his life since 1995.  He has visited the Russian space station Mir, he has walked in space and helped to install the Canadarm2, and he was the first ever Canadian to command the International Space Station.  For those of you who might have been living in a box in 2013, Chris Hadfield’s fame and popularity came from chronicling his journey as commander of Expedition 35.  In this expedition, he engaged a huge swath of humanity by posting pictures to social media sites, taking interviews from space, and making a music video in space with the help of his son and also previous Boiling Point guest Andrew Tidby.  This was all being done while performing dozens of scientific experiments.

The commander has a real knack for communication, inspiration, and connectivity.  Upon returning from space, he wrote his autobiography, An Astronauts Guide to Life on Earth, which shares pearls of wisdom that can apply to people of all stripes, including entrepreneurs.  Such lessons include: how to face fear, how do you devote your life to something that may not come to fruition, and how do you fold your experiences into your life story.

In space, the ship’s orientation toward the Earth or the Sun is called an attitude.  Depending on which way the ship is positioned, things inside the ship do not work.  The commander uses this idea as a metaphor to success in life.  When you are trying to accomplish anything you need to set a direction and have the right attitude that will take you to where you want to be.   You need to define what success would look like to you, not just visualize what success feels like.  According to Hadfield, defining what success would look like is a gift to yourself.  You need to devote yourself to something that excites you and imagine what would make you feel like you are crossing the finish line in a long race.  You also can’t make that long-term goal your only measure of success.  You need to celebrate the steps toward your goal and give yourself the gift of increments toward utter success.   In the end, not reaching your goal is not a failure as you can look back on all you have accomplished during the process.

Hadfield also tells us that you need to sweat the small stuff, but only as it relates to you personally.  You need not spend all of your time worrying about the things that happen half way around the world that will never affect you personally.  There is a phrase that is used quite often in the International Space Station, which says, “What is the next thing that is going to kill us.”  This allows astronauts to focus on what is important and ignore what isn’t.  This is also a metaphor for how to conduct your lives on Earth.  You need to focus on what is important now, not what has happened in the past, or what might happen in the future.   Spending time worrying about what you can’t affect is a waste of time toward your end goal.

The commander also tells us something about being humble.  He says there are three types of people: -1 types, 0 types, and +1 types.  -1 types don’t have high opinions of themselves, while +1 types might be considered boastful.  Hadfield suggests that in most cases, being a 0 type is the way to be.  None of us have gotten to where we are in our lives without the help of others.  This is especially true for an astronaut who relies on a number of people to create a situation where you can travel to space safely.  When you sit on top of the spaceship, there is a tendency to think you are pretty important, but when you show off and act as a +1, there is a lot of damage that can be caused.  In fact, most people who consider themselves to be a +1 are considered by others to be a -1.  The lesson here is to be subtle, to learn, and to be humble.  Hadfield uses this approach in his daily life.  Being a famous astronaut and having a million followers on social media doesn’t change what he has for breakfast or how he conducts himself in daily life.  It just gives him the position of a person setting an example and the ability to share the beautiful events in his life.  It was this type of thinking that pushed the commander to express himself so much and share with the world not just with photos, and words but artistically as well.

Chris Hadfield’s Newest Book – You Are Here: Around the World in 92 Minutes