Do you need to have a “difficult” conversation that you’ve been avoiding? Changing your mindset about the conversation should be the first step.

Executive coach Bruce McLeod talks to us about how these conversations we avoid can be positive situations that give people the opportunity to make choices from the feedback they receive.

2:00 Dave tricks Greg into doubting whether Bruce was on the show before.

3:14 Dave introduces Bruce and their connection through Vision Coaching

3:31 Dave talks about how Bruce is his go to executive coach for organizations looking for culture changes within their organization and how people have challenges with dealing with tough conversations.

4:15 Greg speaks about how this is a topic he is interested in and how he is a Dove according to the DOPE Bird Personality Test and he’d love to learn how to do better in difficult conversations.

5:00 Dave allows Bruce to introduce himself.

5:13 Bruce speaks to his experience and how he found a path to being a coach.

5:37 Greg asks why Bruce found being in the C-suite not as fulfilling.

5:49 Bruce says that it was a lot of politics and he was so far away from the front lines that it forced him to being reactive to all the negative items and not being able to proactive and positive.

6:41 Dave mentions how Bruce told the story of always having his blackberry beside the bed and answering at all times of the day/night.

6:48 Bruce says that is a the reality for many C-suite level executives who work in global operations.

7:15 Greg mentions how when that happens with his wife who is a physician, people are very apologetic when calling at 2 AM and he wonders if Bruce had that same experience.

7:18 Bruce says it would depend on if they really thought through how important an issue is, but if it’s around the world there’s not always a good time, it’s always night time for someone.

7:48 Greg mentions how the book he’s reading Essentialism ties into the conversation we’re having today about how to say No.

8:50 Greg asks Bruce how to have those kind of conversations.

9:05 Bruce agrees and gives examples of difficult conversations he’s had to have in his career in HR that we all might face in the workplace.

9:40 Greg asks, what is the approach to dealing with those conversations.

9:46 Dave asks what is it that stops people from having those conversations, what are the barriers?

9:53 Bruce says he’s answer both of their questions. He says it starts with mindset before skillset. He mentions how the very fact that we call it a difficult conversation starts the issue.

10:38 If we think it’s a difficult conversation than we can project that on to the people we are having the conversation with.

10:54 What if you switched your mindset to say it’s a success building conversation instead?

11:15 Dave mentions the book Crucial Conversations and how it helps to built a stronger relationship as a result.

12:13 Bruce explains some of the reasons why you might look at conversations from a negative light for example how your family or school environment dealt with conflict.

13:40 Bruce says you need to go into a conversation with a mindset that someone is capable of handling the conversation that you are about to have.

14:05 The skillset is easy to teach, the mindset is the challenge.

14:13 Greg asks if there are any tools or practice to help people change as it’s something Greg needs to do consistently.

14:20 Dave gives his feedback on how Greg tends to go to the heart of the matter of things quicker.

15:26 Dave asks how do you support folks

15:30 Bruce explains about how Greg’s point about having the energy to have the difficult conversations and tells a story about someone he coached before who was putting a lot of energy into having the conversation and had been waiting 5 years to have that conversation.

16:55 Bruce says he often asks a room of people if they would want to know feedback he had about them to be better, would they want to hear it and they always say yes. So by not having the conversations you are holding back someone who could grow.

17:07 Greg says that he agrees he thinks we all want the feedback, but we are more concerned about what the person who is delivering that feedback is thinking about us on a personal level.

17:25 Greg says it’s easy to have a relationship insecurity that’s probably stronger than the issue itself.

18:06 Greg says we make it awkward by saying things like “Don’t take this the wrong way….”

19:08 Greg says how do we not say that stuff and just say what we mean, but the other people accept the feedback.

20:36 Dave says it is easier to not give feedback, but when someone does give feedback it shows they care about your growth.

21:00 Dave speaks to how it’s easier to be sensitive when we feel insecure about something we are already nervous about and tells a story about his coach certification through Royal Roads.

21:53 Dave said it was devastating, but in the end it was the best thing for his growth.

22:17 Bruce says that it’s the piece around we want to go into the conversation with a commitment to safety but not a commitment of being uncomfortable.

23:46 Greg asks if saying that projects it on to someone else.

23:57 Bruce says it’s a great question, but he doesn’t think so and he’s owning where he’s at and being transparent where he’s at.

25:05 Greg explains how he normally gives feedback, but admits there’s probably no one way to do because the conversations are different.

25:35 Bruce says there is no step process for having the conversation.

25:56 Bruce had a mentor who would say, What right do you have to withhold information from someone that would help them grow?

26:05 Bruce said it made him realize that by not having the conversation he’s limiting someone’s ability to make a choice.

26:22 Greg mentions it’s similar to what Seth Godin said during his episode about if you don’t ship whatever it is your creative self is about to deliver and you’re being selfish.

26:55 Bruce says it’s the old situation of how long you’d let someone walk around with broccoli in their teeth. It’s uncomfortable, but telling someone is in their best interest.

27:42 Dave says wouldn’t you rather know, then guess what people are thinking?

28:10 Bruce says even in a 360 interview we label things positive and negative, but we really should see it as a data point that gives them an ability to make a choice.

29:00 Greg asks Bruce what he’s been doing while travelling around.

29:15 Bruce explains the focuses of his coaching in the last few weeks.

29:50 Dave explains how the teamwork includes assessing how teams deal with conflict.

30:30 Bruce explains how people can get in touch via the Vision Coaching website and Linkedin. 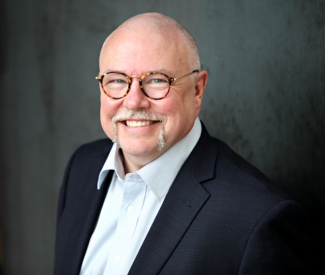 A multi-certified executive coach, Bruce is passionate about seeing people and organizations reach places they never before thought possible!

He knows firsthand what can be accomplished when skill and ability are fused with purpose and passion.

He has personally experienced it! Bruce has had the privilege of working with many who have seen dreams become reality, both for them and their teams.

He helps others create a framework for thinking more innovatively, creating synergy, and adding value.

He has led operations, strategic planning and human resources functions in regional, national and multinational corporations, and has contributed to the kinds of business transformations that garner national notice.

Bruce earned his Certified Executive Coach designation at Royal Roads University and holds Professional Certified Coach credentials through the International Coach Federation. He is also on faculty of the graduate executive coaching program at Royal Roads.

He served for several years as the Global Vice-President, Human Resources for a multi-national Canadian based company. He ultimately left this role to pursue his dream of “all things coaching”. His own executive career path has allowed him to make people-focused operational impacts within a wide range of industry sectors.

His coaching philosophy is rooted in his belief that you are 100% capable and possess within you all the wisdom and creativity you require. His role as a coach is to help you step into your full potential. By serving as a “thinking partner”, you will explore new possibilities and make commitments that you want to hold yourself accountable for.

He works with executives, emerging leaders, and entrepreneurs who are ready to take themselves, or their organization, to the next level of performance. He will help you develop your leadership style, team, purpose, strategies and personal vision into remarkable results you may not even think are possible today.

Are you ready to live BIG?

Bruce has his Professional Certified Coach (PCC) credential, a prestigious designation for a proven coach with at least 750 hours of client coaching experience.